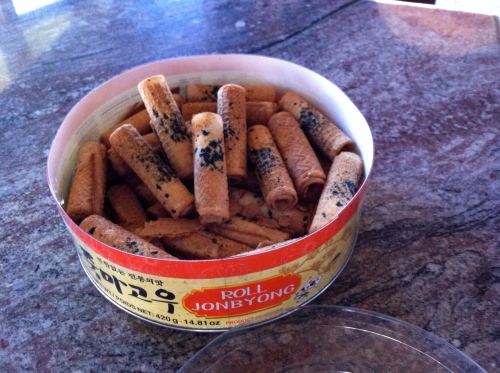 Apologies in advance to my Korean friends – for my ignorance. But I was totally taken aback when a rather large round box of some sort of cookie I had never encountered before landed in my kitchen, compliments of somebody I don’t even personally know. We had been trading sweet treats and her latest offering came from Korea.

Let me preface this by saying I don’t have an extreme high confidence in Asian desserts that, in my lack of knowledge, I usually lump all together. Chinese moon cakes, derivative Japanese dainty concoctions all tend to be too sweet and red bean paste is an acquired taste I haven’t acquired yet. Mango sticky rice pudding is a pleasant exception, anything with mango must have a touch of divinity but such delight is too often marred by the addition of ungodly amount of sugar.

So it was with understandable suspicion that I lifted the lid and peered at the wafer rolls that were neatly stacked in three round layers. To my European mind, they very much resembled Bahlsen’s wafers, the ones that are half dipped in dark chocolate and that I can devour one box at a time. Without even checking the ingredients, I popped one in my mouth. The first reaction was “bizarre”  – what was that finish right after the sweet note? Sesame? No, wait, seaweed? The sprinkle of dark dots  on the surface, on closer inspection, looks like seaweed and the list of very basic ingredients confirms it (flour, sugar, palm oil, egg, salt, seaweed and glucose).

To relieve you from the suspense, let me tell you that the box, at least what I can read of it, calls them Roll Jonbyong, or Korean Crackers, and they only average 120 calories per 4 crackers. I also have to confess that stopping at four is extremely difficult. Upon further research, in the guise of my Korean friend Sarah (or, rather, her mom)  it appears these crackers are related to the Japanese senbei rice crackers, albeit much lighter. Senbei come in many varieties of flavors and thickness and, although I have no data to support this, it is possible that when Japan annexed Korea, new food combinations were born.

I am a big fan of mixing savoury and sweet but I never thought of adding seaweed to my cookies – this opens up a new world of possibilities….